skip to main | skip to sidebar

I've been told by my students that I'm about as old as their moms...

And I've come to terms with that, because a) I am 30 afterall and I have been teaching for awhile. It was bound to happen eventually and b) I realize a lot of their mothers were very YOUNG mothers.

That being said, I didn't realize I would have a STUDENT that was a mom. Well, two instances (that are very different). I have recently come in contact with a former student on myspace. She was one of my students my first year teaching. I taught 6th grade in Virginia. I had one student in particular that I had a good repoire with and I even had her at the house a few times (a total Taboo, I know. But she had a crappy homelife, and I already told you it was my first year) and she looked at me more as a friend than a teacher. Anyways, her and I have been chatting for about a year now, and I know that she is 18 and should have graduated last May (that was weird enough for me), but she struggled a bit and was trying to finish up this year. Well, then about a month ago, I see new pictures posted on her page of a new baby. Her baby!! She had a little girl recently. I mean, I know she's 18, so she's a big girl and all, but that freaked me out a bit. I'm happy for her, it just makes me feel old.

Second story. I had a 7th grader last year that I talked quite a bit with. She was trying to make good decisions and do the right thing. Well, then the beginning of this school rolls around and I hear rumor that she's pregnant. As an 8th grader. It was later confirmed, so I start a dialogue with her and long story short, Grandma wasn't really taking good care of this girl and she hadn't been to the OB yet, even though she was 5 months pregnant already!! Some teachers and the school nurse took her under our wings and made sure she started taking care of herself (I even gave her some of my maternity clothes). She came by and showed me UltraSound pictures to declare it was going to a boy. This is a mixed emotion moment. I am glad she is sharing this part of her life with me and that she feels safe with me, but I did not in any way condone the decisions she had made. Well, she disappeared a few months ago, with rumors flying she had gone to Mexico. I knew if that was true, she wouldn't finish school and that would be it for her. Today in the teacher's lounge, a few teachers were wondering about this girl and trying to guess if she'd had the baby yet. Then, not but an hour later, I'm in my classroom and the Asst. Principal calls and says this girl is visiting and has specifically requested to see me and she has the baby with her. I go down to the office and see her. The baby boy is precious of course (more hair than Grace has now!!), but what a weird feeling. I was happy to hear she was local and planned to return to school in the Fall. I talked to her about the delivery and then had to get back to class. I congratulated her (what else do you say?) and told her to come by any time. I want to be there for her, but I have no training whatsoever in this sort of thing. I know God will give you the words and the heart for what is needed.

I survived GINORMOUS testing. Well, we have a Field Test on Monday (a trial test--doesn't count), but we made it through this week. And me and the girls (3 of the other female 7th grade teachers) went out for caffeine pretty much everyday this week except today. It was just needed. It's not just the stress of reading the instructions to a T, and it isn't just the worry that the kids won't follow the directions and it isn't even the worry that they won't finish in time or if they'll score like we want, but it's also about the craziness that ensues after testing. After the kids have been restrained to their chairs for 2 hours and expected to actually THINK that whole time, they apparently have some built up energy or stress or whatever it is and they have to let it out!! They are hyper in the halls, in the bathrooms and of course in the classroom. They are at each other's throats and ready to jump off the balcony. There were numerous fights and ASDs written and kids farmed out to other classes.

Phew. Thank you Lord, it is over. Because I've run out of spending money for frappucinos...

We had two days of GINORMOUS TESTING last week. We all made it. The kids were stressed a bit and moaned and groaned but they made it. And so did the teachers. Now, we're off to Week 2. Tuesday and Wednesday are Reading and Math Parts 2 and 3. Yippee. At least we have a system now, right? Riiiight...

I survived Day One

Well, the first day of BIG FAT STANDARDIZED TESTS is over. Apparently there were 6 fights after testing though. Pent up stress? Who knows? But they did the writing portion today and as I glanced around the room, it seemed most of them at least made coherent thoughts. That's something...


I'm as nervous and stressed out as the kids.

A Time of Firsts

Okay, let's get it out of the way: I have been bad about writing. There, I said it. Moving on...

To explain the title, you would have to have a crystal ball that could view my past month or so. We've had a lot of Firsts around here. Let's see if I can remember all of them, in order.
This is the FIRST time we've lived a good distance from Ms. Cindy and her family. They lost their home through foreclosure about a month ago, and had to move to a subdivision on the other side of our town. It was bittersweet, as we want the best for them and they are saving money on rent, but we will sure miss having them nearby.
We had our FIRST bad experience getting pictures done at Sears. We've gone there since Mason was a baby, and have found the pictures to be overall cute and worth spending more than we should. But at the beginning of Spring Break (2 weeks ago), we took the kiddos and wanted to get pictures of both of them and some of just Gracie. It started out stressful and continued to be breeding anxiety for all of us. The photographer would snap a picture and Grace would crawl away to eat the camera stand or fuzz or something. She'd snap again and Mason would be picking his nose. Great. So, after waiting to view the proofs, we realized none of them were worthwhile. We walked out of there snapping at each other and feeling bummed. We decided to take a different approach. We went to a nearby park the next day and snapped a billion pictures (okay, more like 200) and made our own collage's. 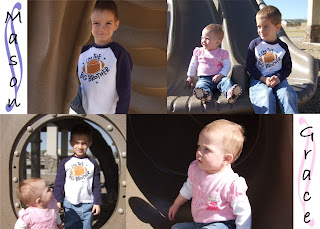 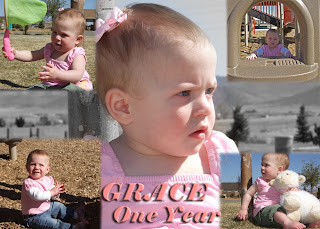 Mason had his FIRST visit to the dentist. There's a local pediatric dentist office here that is supercool: cartoons, video games, balloons, you name it. Mason had a good time and now has a positive mindset of having people look in his mouth. Wish I had had that!!
Grace sat in the big girl carseat that faces forward for the FIRST time. She is so elated to see her brother and be able to see where she's going instead of where she's been!
Both of the kids had their FIRST visit to a real zoo. Mason went to the local zoo, but that's not much to write home about (would you really write home about a zoo visit?). We went to the big city zoo and Mason got a big kick out of it: mostly because his cousin Morgan went with us, but also because he saw animals that he's only seen in books. (Like a giant eagle that looked like it could pick up a school bus!) 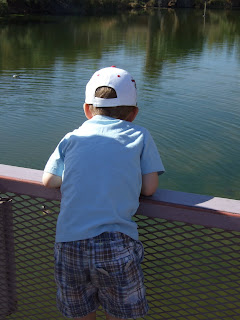 While at the zoo, Grace her FIRST ride on a carousel. She looked hesitant, but seemed to enjoy riding with Grandma.

Lastly, and the most unbelievable for us, was Grace's FIRST birthday. Later on the same day as the zoo, we met friends and family at a park near Nana and Papa's and had a great time. Grace was blessed with loads of gifts (including her FIRST doll) and we were blessed with the love of wonderful people. Of course Grandma made the cake and it was tasty.
Phew! I think that's it. Hopefully this makes up for my absence. I promise this won't be the LAST entry...

Will write after tomorrow. Bear with me. I should have a lot to say. If I can remember anything. My brain is turning to mush...